Last summer Angela Merkel swung open her country’s gates to the largest migration since the war. By year’s end, 1.1 million people had streamed into Germany from the Middle East, North Africa and the Balkans: in January it was another 100,000.

And yet, the chancellor won’t budge. Her mantra is “Wir schaffen das”, Merkel-speak for “yes, we can”. At first, her compatriots did her proud, putting to shame the French who keep several thousand refugees cooped up in Calais, and the British who bar them from England’s green and pleasant land. Germany’s authorities managed to whisk thousands off into shelters across the country. Armies of donors and volunteers pitched in with food, clothes and hands-on help. 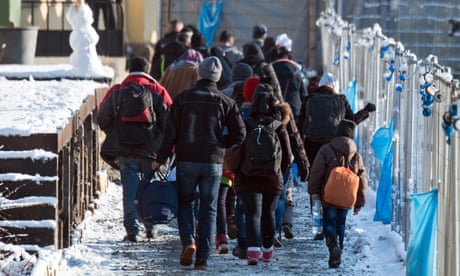 But now “yes, we can” sounds like a record stuck in a groove. Merkel’s approval ratings have plunged from a peak of 75% to 46%. Can she handle the refugee crisis? Eight out of 10 Germans say no. Would you vote for Merkel’s Christian Democrats? The ayes are down by nine points compared with the last election. And who is making hay? The anti-immigrant populist right. The Alternative für Deutschland party may score as much as 17% in the state election in Saxony-Anhalt on Sunday.

The chancellor’s impeccable moral intentions – her version of “give me your tired, you poor, your huddled masses” – are crashing up against the ballot box. Is her moral stance “irrational”, indeed, “megalomaniac”, as Cicero magazine has asked. Merkel’s political nemesis, Bavarian strongman Horst Seehofer, says: “I simply cannot figure out her strategy.”

Dead-set against closing German borders, Merkel has become a lonely giant. Even Europe’s moral superpower Sweden imposed border controls in January, followed by Denmark. In February, Austria gathered the heirs of the former Habsburg empire to close off the “Balkan route” from Turkey into central Europe.

Even Merkel’s mightiest cabinet ally, Wolfgang Schäuble, is putting her on notice: “The refugee numbers must be drastically cut. Otherwise, it is ‘we can do it’ no more.” So Merkel has come up with a new mantra – the “European solution” – which is precisely what has not worked in the past.

For one, the rest of Europe won’t take the refugee load off Germany. It is “keep out!” in Hungary and Poland; the Scandinavians have essentially sealed their borders; the Balkan countries just waved the refugees through all the way to Austria, which sent them north with a hearty goodbye.

The approach is to let the other guy handle it, which is exactly what Europeans, Berlin included, did to Italy when migrants from North Africa began to pour in after the outbreak of the Arab spring. So on to Merkel’s “Europe-plus solution” anchored in Turkey.

The chancellor has been trying to bribe Turkey with €3bn to keep refugees out of the Schengen area. This borderless realm stretches from Portugal to Poland, with Greece manning the easternmost ramparts. Turkey is already playing unwilling host to about 2.5 million Syrians. And its president, Recep Tayyip Erdoğan, has his own fish to fry, such as bombing Kurdish positions in Syria and closing down opposition newspapers. Naturally, the first of these makes for more refugees. Watch the €3bn bribe shoot upward. 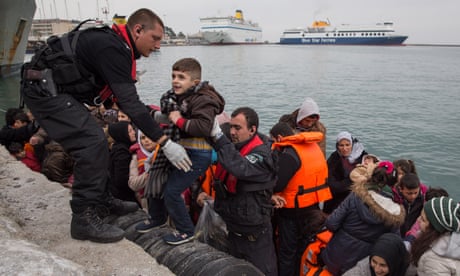 Refugee crisis: UK to back calls for EU to send more money to Turkey

But what about the refugees who come by sea? A booming smuggling industry takes those stranded in Turkey in rust buckets and rubber rafts to the closest Greek islands. Berlin has put together a little Nato flotilla to monitor the Aegean. But even with the British patrol boats, these ships will do little more than detect the craft and relay their positions to the Greek and Turkish coastguards.

Finally, the Germans want to pour cash into the camps in Jordan and Lebanon to keep the Syrian refugees from marching westward. The thrust of these desperate manoeuvres is to outsource the problem. The hope is to transmute Germany’s “no, we actually can’t” into “yes, others will have to”. Nobody quite understands why Merkel, this consummate reader of how the wind is blowing after 10 years in office, would suddenly turn into a woman of the cloth, orating like Martin Luther, “I cannot and will not recant” and so “act against my conscience”. Luther prevailed against the Pope; Merkel’s obstinacy in the face of her isolation sharpens the puzzle.

Actually, “Plan B”, though cloaked in noble principle, is already in play. The first part is to bribe the Turks. The second is the tacit threat to seal Germany’s own borders; there goes Schengen, perhaps even the EU itself. The third is to outsource the problem. And lo, the Balkan bloc is deploying barbed-wire coils and battalions of guards far to the southeast. It is now Fortress Schengen minus Greece – a small price to pay to protect the core. If the dam holds, the refugee stream will dwindle. Thus, Merkel could save her high-minded open-door policy because it would no longer be tested by refugee waves from the Middle East.

There is just one problem with Germanising Europe’s strategy. Damming up the traffic in Macedonia turns Greece, a failing state, into one huge campsite. So the Greeks will have to be paid off while the Turks will gouge out a lot more than €3bn. Germany, the EU’s Croesus, will foot most of the bill.

But it’s worth it. What’s 10, 20 or 30 billion euros against the catastrophic alternative: Germany in revolt, Merkel swept out of office and Europe damaged beyond repair?